METAFECTENE® PRO is a liposome-based transfection reagent consisting of a mixture of polycationic and neutral lipids. It is an advanced product based on METAFECTENE. The structural changes of the cationic lipids that comprise them result in greater efficacy and less toxicity.

Viral transfection uses genetically modified viruses that are no longer pathogenic and carry the gene to be introduced. In this method, problems include stable, often non-directional, integration of the gene into the host cell genome, laborious production of viruses, and strong immune response. Physical methods such as electroporation or microinjection are expensive and of limited use in routine procedures. 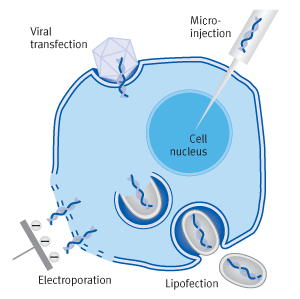 In aqueous solutions, cationic lipids form vesicles with a bilayer lipid sheet, known as liposomes. When liposomes encounter nucleic acids, they reform into lipid complexes of nucleic acids called lipoplexes that can be actively taken up by eukaryotic cells through endocytosis. In this case, the lipoplex enters the cell cytosol through the endosomes.

DNA that enters the cell cytosol cannot penetrate the membrane of the cell nucleus (“nuclear barrier”). Therefore, access to the nucleus is only possible if the nuclear membrane dissolves during mitosis. For this reason, the rate of cell division is critical in DNA transfection and must be as high as possible for efficient transfection.

For RNA transfection, there is no “nuclear barrier”, since RNA does not need to enter the nucleus to develop its biological effects. As a consequence, the rate of cell division has no influence. Lipofection is a complex process in which the amount of lipoplex and the ratio of genetic material in relation to the transfection reagent, that is, the composition of the lipoplex must be precisely optimized for each cell type.